To be offered as Lot 8, the stamp has a vertical ”SPECIMEN” overprint in carmine towards the right side. It’s described by auctioneers as being in Very Fine condition.

The first issue of the Pence series, the 12-penny black was printed by the New York firm Rawdon, Wright, Hatch and Edson. The original die was engraved by Alfred Jones based on Alfred Chalon’s portrait of a young Queen Victoria that was also used on the stamps of other British colonies.

Debt list for Gassy Jack Deighton, one of Vancouver’s founders, goes up for auction

Audio clip  lasts only a few minutes,
find after David Eby about 1/3 of the way through show @ 1 Hour and 9 minutes approx

Gassy Jack Deighton’s debts at his death, handwritten list totalling $5,000 or so.

John Mackie has featured  our 1200th auction including Isaac Brock, Gassy Jack and more in an article for the Vancouver Sun here: https://vancouversun.com/news/local-news/handwritten-list-of-gassy-jacks-debts-to-be-sold 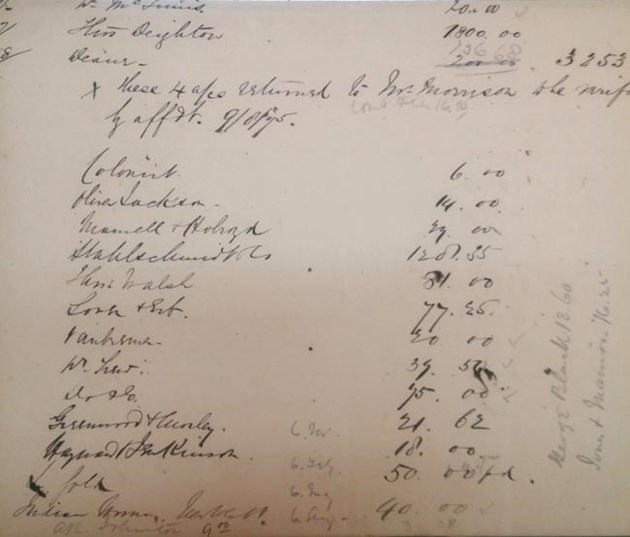 VANCOUVER — A glimpse of British Columbia’s sometimes seamy history goes to the highest bidder Saturday in an online auction.

A legal document written after the May 1875 death of John Deighton, better known as Gassy Jack, lists the debts of one of the first men to bring liquor to the hardscrabble community of Granville, which eventually became the city of Vancouver.

Brian Grant Duff of All Nations Stamp and Coin, the Vancouver business running the online auction, said the list has the potential to “amplify” our understanding of the city’s earliest years.

“It gives us a good opportunity to talk about history, so there is a demand for these things,” Duff said in a telephone interview.

Deighton, originally from Hull in England, arrived on the shores of Burrard Inlet after a series of adventures and misadventures that saw him strike out during the Fraser River gold rush and work for a time as a river boat captain.

He then lost everything as the operator of a saloon in the then-booming town of New Westminster.

“Gassy Jack left his saloon in the hands of an American friend, who had an enormous Fourth of July party and gave away all the stock. So he was kind of wiped out there,” said Duff.

Deighton took one of his few remaining barrels of whisky and paddled by canoe to the mouth of the Fraser River and around what is now Point Grey into English Bay. He then used the liquor to entice men at an outpost sawmill to help him build another saloon, said Duff.

“Gassy Jack was pleased with his success here in proto-Vancouver, early Vancouver, and was known to let his family know that he had done well,” he said.

But the legal document, originally from a collection compiled by stamp and colonial artifacts collector Gerald Wellburn, shows Deighton was strapped for cash when he died, listing debts amounting to almost $5,000.

They include $4 amounts owed to several different men, $500 to Capt. John Irving, a wealthy steamship captain in New Westminster, and $1,800 to Deighton’s brother and sister-in-law, who had arrived from England to help him as he suffered health problems. Thomas Deighton sued his brother’s estate after he died at the age of 45 to recover that cash, Duff said.

“Gassy Jack, if he were around, would probably complain that they were taking advantage of him,” said Duff.

Online bidding for the document, which started at $500, had passed, $1,000 on Wednesday and Duff expected it would eventually change hands for several thousand dollars.

Collectors who aren’t interested in Vancouver or colonial history and don’t know Deighton’s story “might not appreciate” the document, said Duff, but there’s little question it sheds more light on the history of one B.C.’s many colourful characters.

“He is said to have predicted that a great city would rise where he landed on the beach with his barrel of whisky and had that original saloon built,” Duff said.

Our Milestone 1200th Auction has concluded

View the A1200 Prices Realized here