“Legend has it Gassy Jack Deighton got his nickname because he was a bit of a blowhard. But he doesn’t seem to have been much of a letter writer — only a couple of letters from the founder of Gastown are known to exist. But that only makes them more valuable. An 1875 Gassy Jack letter that went up for auction March 12 attracted a dozen bidders. When the smoke cleared, it had sold for an astounding $44,000.” 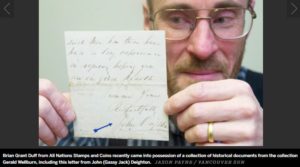 View and Bid in this week’s Auction